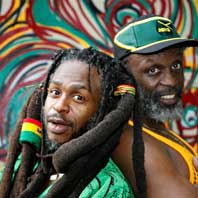 Banjul, The Gambia (May 9, 2014). The Jamaican delegation of performers, promoters, cultural heritage pilgrims and media specialists are making their way to the eleventh staging of the Gambia Roots Homecoming Festival to be showcased May 9-17, 2014 in Banjul, The Gambia. The festival spans seven days of non-stop activities, and commences with the official opening presided by His Excellency, The President of the Republic of The Gambia, Yahya A.J.J. Jammeh. The following brief outline of scheduled events is now unfolding, beginning with the Welcome Reception on May 9, and the highly anticipated and well-publicized Sizzla Kalonji Reggae Concert on May 10. This is followed next week May 13-15 by the Roots Pilgrimage to Juffureh/Albreda villages, Symposium, Regatta, Rites of Passage ‘Futampaf’ a Jola initiation ceremony hosted by President A.J.J. Jammeh and the grand finale – African Gala Dinner (Taste of Africa) on May 15th.

The excitement is building, the sounds of the festival drummers are calling the Diaspora and Gambians to take their place at the musical extravaganza this evening, featuring The Gambia Roots Festival Cultural Ambassador, Sizzla Kalonji, occurring between 9:00 p.m. until 2:00 a.m. at the Independence Stadium in Bakau.

Sizzla’s backing band is the original Firehouse Crew with George Miller, Donald Dennis & Paul Crosdale. They are joined by David Murray and Courtney Edwards with engineers Richard Bramwell, Anthony Williams and Robert Murphy. Firehouse George, the band leader of the group said “the entertainment group will perform on Saturday, May 10, 2014, performing new and old songs, such as: Praise Ye Jah, Black Woman & Child, the Back to Africa theme song – Center of Attraction, Good Ways, just to name a few. The group will reach into their music catalogue of songs from 1995 to present, to include the new “Grammy-nominated” album Messiah. The band promises to deliver a most memorable show.”

The festival’s excitement is intensifying as the Diaspora pours into The Gambia for the official opening ceremony presided over by His Excellency, Dr., Professor, Yahya A.J.J. Jammeh, the President of the Republic of The Gambia, on May 11, 2014. The official opening will include official speeches, cultural entertainment and features various carnival processions of masquerades of ethnic groups of the Gambia, dance troupes, drum symphony, acrobatic displays of the Fulani tribe and cultural entertainers from the regions of The Gambia and beyond. International guests are invited to participate in the carnival precession.

The African Diaspora are making their way to The Gambia from major gateways across the world including the United Kingdom, United States of America, Caribbean and Canada. The 11th staging of The Gambia Roots homecoming international festival will undoubtedly be one of the best thus far, based on forward planning from international promoters in the USA,UK and Caribbean. In Jamaica, Olimatta Taal, Official Publicist working with The Gambia’s Ministry of Tourism and her team (Denise Isis Miller (Jamaican Promoter / Roots FM Radio 96.1), Damien Baddy (Filmmaker) & Sharon Parris-Chambers (Publicist/ Letsdoitinthecaribbean.com News) has worked tirelessly to sensitize and promote the festival.

Should you not be attending in May, take heart, there is another festival coming up respectively in October 2014 in Ghana and February 2015 in The Gambia. For more information, kindly contact Olimatta Taal at Olimatta@gmail.com or in Jamaica, Denise Isis Miller isista_fari@yahoo.com
or 1-876-384-5125.

Get “Dark Horse" feat. Juicy J from Katy Perry’s PRISM: Do you want to play with magic? Insert yourself into the video using #DarkHorseCam: THE PRISMATIC WORLD TOUR coming to you soon: Follow Katy Perry: